My husband, Dave, and I were walking down Royal Street on a Sunday afternoon during my first-ever trip to New Orleans when I suddenly stopped in my tracks and grabbed Dave’s arm. He looked at me like I had lost my mind.

“I think I know that guy,” I told him, gesturing toward a man playing harmonica on the corner of Royal and Toulouse, maybe a half-dozen yards ahead of us. 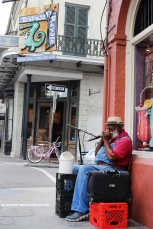 At this point Dave really thinks I have lost it. I have never been to the state of Louisiana before, let alone New Orleans. How could I know a New Orleans street performer?

“I think he’s in the Playing for Change videos,” I told Dave.

I was introduced to Playing for Change during my last semester at Western Kentucky University. One of my professors, Harry Allen, often showed us online videos or articles, usually to keep us informed of current events. Sometimes, he showed us things just because they made him happy, and he thought they’d make us happy. Playing for Change was one of those happy things.

The Playing for Change Foundation is an organization that raises funds to build schools and start programs that bring music into underprivileged communities. They host concerts and events worldwide, bringing together musicians from across the globe.

Playing for Change’s first “song around the world” video, the one Mr. Allen showed us in class, wove together recordings of street performers and musical groups from across the globe into one beautiful version of “Stand By Me.”

The second musician in the “Stand By Me” video was Grandpa Elliott, singing in New Orleans, LA.

Grandpa Elliott playing on the corner of Royal and Toulouse

Over the last three years, I have watched many of Playing for Change’s videos, several of them featuring Grandpa Elliott. That rendition of “Stand By Me” is one of my go-to videos when I’m having a crappy day. So when I saw Grandpa Elliott playing harmonica on the corner of Royal and Toulouse, in the exact same red polo shirt and denim overalls he wore singing “Stand By Me,” I was pretty much tripping over myself in excitement.

After several minutes of gawking at Grandpa Elliott and debating with Dave whether I should talk to him, and wondering if maybe I had lost my mind after all, I finally took Dave’s nudge and walked over to Grandpa Elliott.

His real name is Elliott Small, and he’s lived in New Orleans all of his 79 years, he told me. He has played harmonica, sung in an a capella group and tap danced throughout his New Orleans street performance career.

He wishes his mother had brought a guitar into the home, Grandpa Elliott said, but that was never to be. The instrument he was exposed to as a child was the harmonica, because his uncle played it. Elliott watched his uncle play the harmonica when he came to visit, and he knew he wanted to learn.

One day when Elliott was little, his uncle came to his house for just a one-night stay while on one of his business trips, Grandpa Elliott said. There was only one bed, so he and his mom and his uncle all shared the bed that night. His uncle stuck his harmonica in his pocket before he went to sleep. When he got up in the morning, in a hurry to get to work, Grandpa Elliott said he watched his uncle straighten his shirt and pants, and the harmonica fell out because it was caught in his shirt tail. Grandpa Elliott laughed as he told me he purposely didn’t tell his uncle the harmonica had fallen out of his pocket.

“Because I wanted that harmonica,” Grandpa Elliott said.

He has been playing harmonica ever since, and entertaining the streets of New Orleans with its sounds for decades.

One thought on “Meeting Grandpa Elliott”